Our last meeting was in March and it is clear that nothing is going to happen before our regular “summer break”.  Hopefully come September/October the situation will be clearer and we will have an indication of the AAS restart date.
In the meantime I thought I’d share 3 items I’ve read in the last couple of weeks (just in case anyone is interested!).  Further details on the topics and the sources I have read are on the “General Items” page.

Had a look to see if I could spot Mercury the other evening.  Unfortunately, from my location the Blorenge is “to high in the sky”!

Nick posted about the Starlink Satellites on the 20th April and suggested that observational astronomers are not happy with the potential interference.  Starlink aim to have around 1,600 satellites in orbit by 2022 with the long term objective of up to 12,000, providing satellite internet access.
Well, it is not only observational enthusiasts that are concerned radio astronomers are upset as well.
I have posted a message from the BAA-RAG group (British Astronomical Association – Radio Astronomy Group) on the “General Items” page ( LINK ) that outlines their concerns.

Pluto may have been demoted from planet status back in 2006 but astronomers are still trying to explain the orbits of a number of other Kuiper Belt objects which are in highly elliptical orbits. 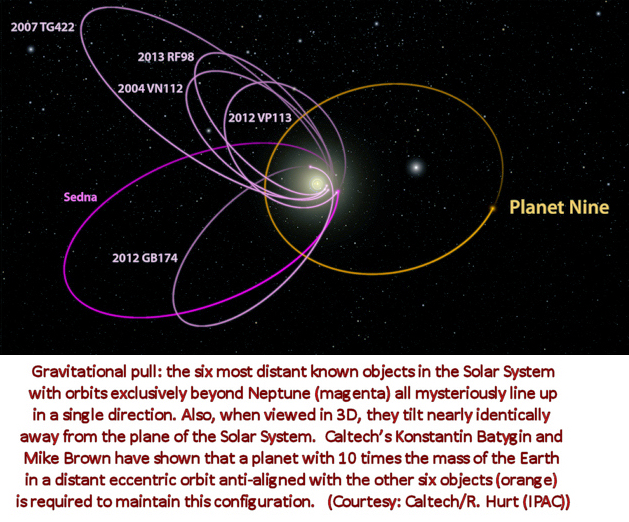 Whilst searches for a conventional “Planet Nine” have proved unsuccessful so far a report in Physics World, dated 19th May, ( Link ) looks at the proposal by Edwar Witten, Princeton, to evaluate the suggestion, first made in 2019 by Scholtz, Durham, and Unwin, Chicago, that a small black hole, around 10 times the mass of the Earth, could be stabilising these orbits.  This is very small, a black hole the mass of the sun only has a radius of around 3 km (the Schwarzschild radius), the distance from Abergavenny to Govilon.

Witten’s proposal is to launch a fleet of lightweight probes, 100g, in the direction of the presumed Black Hole.  To quote the article “His proposal is a more modest version of the Breakthrough Starshot project ( Link ) which aims to send ultra-light probes on a 20 year journey to the nearby star Alpha Centauri using an Earth bound laser array”.  Witten’s proposal would involve a 10 year journey to 500 AU, well beyond the Kuiper Belt, which is thought to extend to 50 AU and towards the hypothetical Oort Cloud which may start at 2,000 AU.

However, Witten does qualify his proposal, “It is far from clear that this approach is practical…”

Mike Brown, Caltech, a Planet 9 searcher says “We’re still looking hard.  If we don’t find Planet Nine in any of the dedicated searches, I suspect it will turn up pretty quickly in LSST [the Large Synoptic Survey Telescope”.  Read Brown’s Planet 9 hypothesis at ( Link )

Worried about Corona Virus?  Desperate for a summer holiday?  Looking for somewhere off the beaten track, not over-run by tourists and Corona free?

An article on the Astrobites website looks at the possibility of the Galilean moons as potential possibilities.

I have posted the astrobites article on the “general Items” page ( HERE ) and the address for the actual article is HERE,  but in summary the best bet looks like Callisto.
Io  :  the closest to Jupiter, is the most geologically active of the moons due to the tidal forces from the planet.  There are strong enough to cause solid tides where the the surface bulges 100m or so a day.  It is also a bit close for the radiation from Jupiter, some 4.5 million times that on earth.
Europa  :  Although not covered by the astrobites article Europa doesn’t really appeal as a holiday destination.  Like our moon one side is always facing Jupiter.  It is the smallest of the 4 moons and is comprised of a smooth surface, thought to be ice, overlying an ocean with a iron core.  It is the smallest, thus the lowest gravity, subject to strong tidal forces and prone to the eruption of water spouts over 100 miles high and high radiation from Jupiter.
Ganymede  :  It does have an internal magnetic field, but only a small fraction of the Earth’s, so radiation is definitely still a problem and you would have to stay under ground.  Shame really as the sight of Jupiter in the sky, 36 times larger than our moon and amazing aurora, must be something to behold.
Callisto  :  the furthest of the Galilean moons for Jupiter.  This results in a radiation level only 12 times that on Earth, probably fine for a 2 week holiday.  There is also plenty of water on the moon so showers and hand washing should be OK.

The other downside is, of course, getting there.  No charter flights at the moment and it did take NASA’s Juno probe 5 years to get there!

It has been brought to my attention, by Gavin, that the Federation of Astronomical Societies is holding a “National Astronomy Week” from the 14th to the 22nd November, 2020.
Despite the coincidence this week has not been arranged to celebrate the 10th anniversary of the AAS (8th Nov, 2010) but rather to mark the closest approach of Mars to Earth until 2033.

Further info from the Federation of Astronomical Societies website HERE.

Should AAS consider doing something; for our 10th anniversary and/or the NAW??

Next Meeting is on Monday 25th November.  It will be an open “round the table” discussion on a number of various topics.  I will put up some suggestions for discussion items on the website in the next week.  If anyone has a topic they would like covered just drop me a mail.
A good crowd turned out on the 11th for Dr Annabel Cartwright’s talk on the hypothesis of transfers of life and organisms between Venus & Earth 500 million years ago.  She said “watch this space” re investigations on a search for biological markers in the Venusian atmosphere.  I await any news with interest!
It’s good to hear of non standard hypotheses, based on the science, that challenge the established view.  Whether they prove to be right or wrong they help to advance or knowledge and understanding.